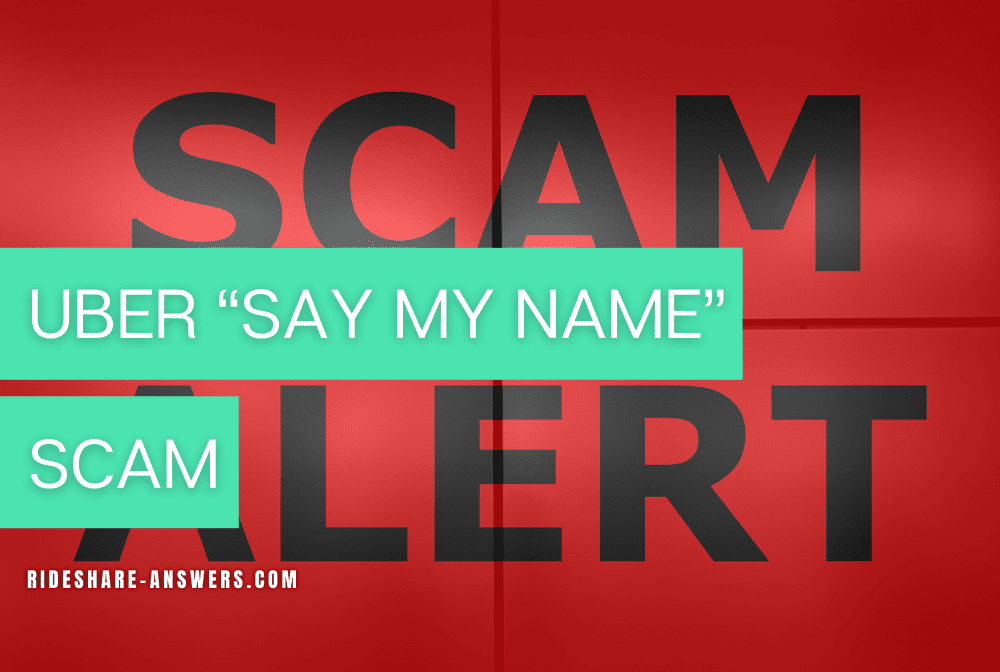 Used by millions of people worldwide, Uber has revolutionized the way people travel.

The undeniable convenience of their services has seen the rideshare company’s popularity rise at a rapid rate.

However, one drawback of Uber’s growth is the opportunity it has provided for scammers to take advantage of unsuspecting drivers.

The “say my name” scam is a prime example of this. It is a method used by grifters to essentially steal another customer’s Uber drive through deception.

In this guide, we’ll explain everything you need to know about the “say my name” scam so that you can avoid falling victim to it.

What Exactly is the “Say My Name” Scam?

In early 2019, a horrific crime occurred when a young woman called Samantha Josephson mistook a stranger’s vehicle for the Uber she had booked minutes earlier.

Tragically, she was murdered by the driver. Her death was met with an outpouring of anger and concern online, and people began to post using the hashtag – “WhatsMyName”.

As the movement gained momentum in the wake of Samantha’s untimely passing, people began to demand that changes were made to the way Uber drivers identified themselves to passengers.

A collective suggestion was made, in an attempt to solve the problem and prevent drivers from impersonating Uber professionals.

Although this may look like a foolproof solution to the aforementioned issue, what happens if the person approaching the Uber driver isn’t a genuine passenger?

Opportunists began to use this newly established etiquette to scam drivers into giving them free rides, simply by being in the right place at the right time (much like many of the other most common Uber passenger scams).

How Does the “Say My Name” Scam Work?

Perhaps the most disturbing aspect of the “say my name” scam is that it is based on the anxiety and terror caused by Samantha Josephson’s murder.

It’s understandable that after the media coverage and online movement related to that case, Uber passengers became more cautious about flippantly hopping into a stranger’s vehicle.

Moreover, this had a knock-on effect on the Uber drivers who wanted to avoid being seen in a negative light.

Consequently, many felt the need to ease the fears of their passengers by obliging to the request of providing their names before the journey ensued.

Although the intentions behind the #WhatsMyName movement were undoubtedly sincere and positive, upon further analysis it becomes clear that it is very easily exploited by scammers.

When customers book their Uber rides, they are presented with key details including the full name of the driver, an image of their face, and of course the specifics of their vehicle.

In comparison, the drivers are provided only with the name of the passenger, and the address of the established pick-up point.

The name that drivers are provided with doesn’t have to be verified, so there isn’t even a guarantee that they have the passengers genuine details. Thus, the customer is at an advantage when it comes to verifying the identity of their Uber driver.

It’s easy to see then, how a scammer could pinpoint an unsuspecting Uber vehicle, make a demand to verify their full name, and by deception steal the ride from the genuine paying customer.

While it may seem like the “say my name” scam could be avoided, in reality, it’s a trap that drivers can fall into quite easily.

Here’s an example of how the scam could unfold. Let’s use our imaginations for a moment.

You’ve just started your new role as an Uber driver. Your car has passed the various tests, and your background check has been performed. You’re a little nervous about your first shift on the road, as you have limited experience driving passengers around.

A ride request appears on your Uber driver app, and you head off to the chosen pickup location to meet your customer.

When you arrive, you park up in the designated area and await your passenger. Shortly after, a person walks out of the bar next across the road and saunters over to your vehicle.

The person opens up the passenger door and bends down to greet you. You say “Hello” to one another and they reply by asking “What name is this booked for please?”

You answer with the name you received on your driver app.

The person confirms by saying “Yeah, this is my ride.” They then hop into the back seat and make a request.

“Is there any chance you could take me to the Italian restaurant by the Cathedral please, my friends have changed their plans for me!”

Wanting to be professional and courteous, you agree to the new destination and set off without giving it a second thought.

Once the passenger has left your vehicle, you get another message on your Uber driver app. It’s from the customer you supposedly just dropped off at the restaurant, except they’re claiming that you never showed up for their ride.

Not only has your trust been abused, but you’ve now gotten behind on your time and you’ve lost on the fare from the journey.

This is just one example of how easy it is for scams like “say my name” to be used on unsuspecting drivers.

The best way to prevent Uber-related scams from occurring is through the sharing of knowledge and information.

Uber’s policies are designed to minimize the risk of “say my name” scams and other similar plots from materializing. Being aware of these terms and conditions allows passengers and drivers to use the service with confidence.

If you’re an Uber passenger, the first thing you should be aware of is that it is the correct practice for the driver to ask you your name before you embark on your journey.

Much confusion is caused by passengers being unaware that this is considered to be proper conduct from the driver. In Uber’s terms and conditions, it is made clear that the driver is expected to check the passenger’s name before they provide their own.

It’s worth remembering that the Uber driver only has one piece of information on the rider – their name. Therefore this is the only means they have of verifying your identity before they give you a ride.

By verifying that your name matches the name they have been presented within their driver app, they can reduce the risk of scenarios like the one I described in the previous section from occurring.

So if an Uber driver asks for your name before allowing you to begin your ride, don’t take offense, they’re simply following the terms and conditions of their service.

Another useful piece of information you should be aware of is that under no circumstances should an Uber driver ever call you.

Uber doesn’t allow any contact between passengers and drivers outside of their app. This means that the driver can only use the onboard messenger feature within the app.

This prevents customers and drivers from liaising with one another through personal messages and phone calls, which eliminates the risk of rides being provided “on the side”.

The driver is unable to see your phone number, and you cannot see their number either. This measure protects both of you and is integral to the overall security of Uber’s service.

How to Avoid Being Scammed As an Uber Driver

Although we’d like to think that every Uber rider is honest and has integrity, the reality is that there are always going to be certain individuals who try to exploit the service.

If you’re an Uber driver or perhaps considering becoming one in the future, there are certain measures you can take to avoid falling victim to the “say my name” scam or other similar ones.

Firstly, you should never state the name of the customer you’re picking up until after the person approaching your vehicle provides their name.

Once the name has been provided, you should double-check it against the name you have on your driver app.

Then, it’s a good idea to ask the person to say the name of the driver they’re expecting so that you can check that they are waiting for you.

Ultimately, an Uber driver should never allow a person into their vehicle without first establishing each other’s identities, with the passenger stating their name first.

All things considered, Uber is very safe and unproblematic when you consider the sheer number of happy customers who use the service every day.

Nevertheless, the “say my name” scam and other similar deceptions make it necessary for passengers and drivers to be vigilant and follow the rules set out by Uber at all times.