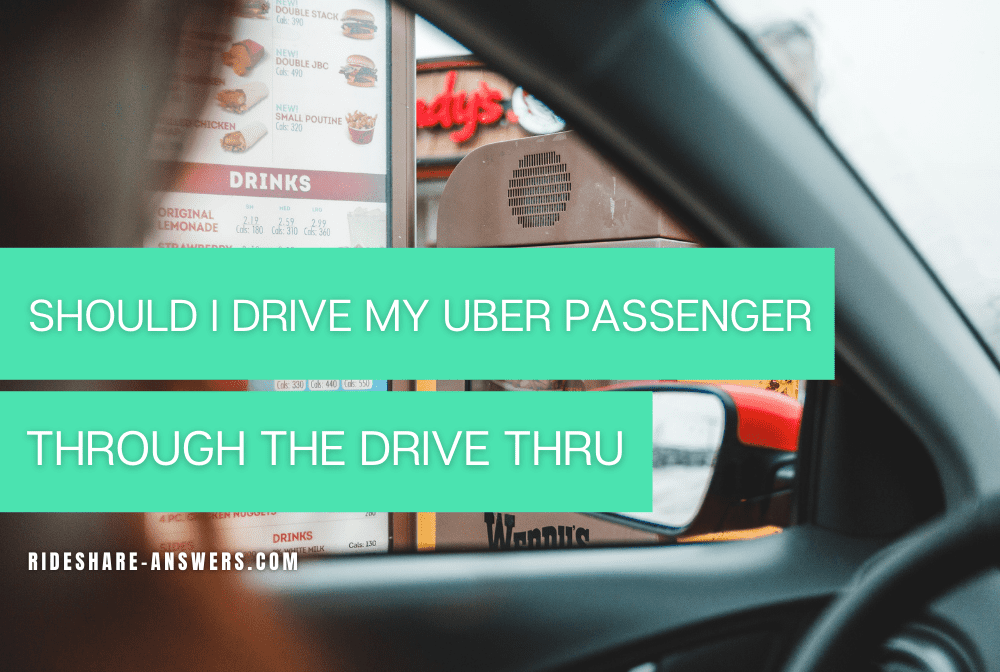 Sometimes late night pax want to pull into McDonalds to get food on the drive home. In the back of your mind you’re thinking “what’s the big deal – worst case scenario I get some down time and I get paid for it” – but in reality there are any number of reasons you don’t want to risk it.

The Uber Drive Thru Scenario

Let’s think about the average request to take your Uber through the Drive-Thru. It’s 11pm, it’s raining, you pick up a passenger outside a bar. They’re drunk so it takes them twice as long to get into the car. After a minute of pleasantries, they ask if you could pull into the nearest McDonalds drive thru “real quick”.

What are the plusses here:

So should you do it? Probably not.

Unless you’re on a higher tier service or on a surge, you’re probably not going to make very much money getting paid to sit in the drive thru – but that’s not even the worst part.

As Uber Eats drivers will tell you – food smells linger in your car. If you allow your passenger to pick up McDonalds and then sit in the back seat sneaking fries, your car is going to smell like McDonalds for the next passenger (and don’t pretend your passenger isn’t going to eat in your car).

Now you have to check your back seat for food left over by the passenger AND you have a car that stinks for your next passenger – and there goes your rating.

What do other drivers say about taking Uber passengers through the Drive Thru?

This is actually a big topic of conversation online. While many drivers say it’s only happened to them once or twice, most of the late night drivers hear it constantly.

Slow Lines at the Drive Thru

The biggest issue people experience is getting stuck in a long line for a slow-moving drive-thru and missing a good surge. Really on a busy night, you want to get your passenger home and then head back downtown as quickly as possible so you can get that surge money. If you’re sitting outside Taco Bell five miles from the action and your buddy texts you that downtown is popping, no amount of free fries will make you that money back.

McDonalds On My Seats

The next issue people report is passengers who make a mess in the back seat. Look, there’s no way any human can sit with a bag of fries and not pull out one or two. However, when you’re dealing with drunks, they’re going to be hungry, and they’re probably going to pull out their big mac, take big old bite, and leave some sauce on your back seat. Now, is it worth a soilage charge for a little mayo? Even worse, will you notice it before the next passenger in the back dress gets in? Then you’re in a whole other world of hurt.

Finally, if you’re in a car with a bag of fries for ten minutes taking your passenger home, you’re going to end up with a car that smells of fries. That’s because the oil used in frying aerates somewhat, and sticks to the inside of your car. If you bring the passenger to somewhere extra greasy (hello Steak N Shake) and the oil seeps out of the bottom of the bag and onto the seat… Good luck – you’ll be smelling that for a week.

Conclusion – Say No To Uber Drive Thru

At the end of the day, it’s up to you – but this is one you’ll want to take a miss on. Sure, your passenger might give you a little tip, but you could just as likely end up with a car that smells of fried food for the next week, and no tip is going to cover that.